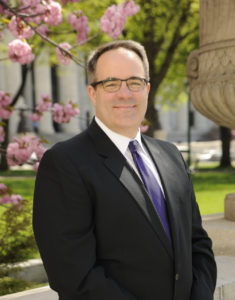 Ted Potrikus manages the daily operation of the Council, overseeing its government relations and member service offerings, as well as its business affairs. He joined the Retail Council in 1989 as director of public affairs and was promoted in 1996 to vice president. He was promoted in 2000 to senior vice president and director of government relations and again in 2003 to executive vice president. The Council elected him to its board of directors as vice chairman in 2008. He also serves as chairman of Retail Council Services Corp., the Council’s wholly-owned subsidiary.

Ted appears frequently on media outlets throughout New York State and has been a guest on BBC World News, National Public Radio, MSNBC, and other international media.

Representing New York’s retailers for more than 25 years before New York’s state government and its various iterations, he has helped guide the industry through challenges including the successful campaign to make New York the first state to require the collection of sales tax on Internet purchases, the appropriate regulation of gift cards, and, in 2013, co-authored “The Customers’ Bill of Rights,” working with leading civil rights groups to underscore the retail industry’s commitment to shopping equity.

Ted’s previous work included two years as a member of the New York State Senate Education Committee staff, and nearly two years as editor of a community weekly newspaper in suburban Rochester, New York. He holds a Bachelor’s degree (1984) in communication / journalism from St. John Fisher College in Rochester, New York, and is a native of Cooperstown, New York. He and his wife, Angela, reside in Niskayuna, New York and are parents of daughters Lianna and Maggie.

Aside from his goal to push the Retail Council to new levels of success on behalf of its members small and large, Ted works to create the perfect 25-song playlist for his iPod and complete the New York Times crossword each day.